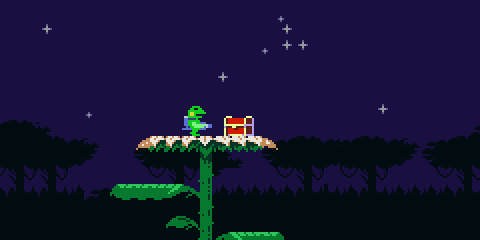 In Kero Blaster, Pixel's first full mobile offering, you control a frog working for Cat & Frog, a teleporter company. Armed with a peashooter and trained in the custodial sciences, he must venture forth to clean the teleporters of strange black "things". Find new blasters and upgrade them with coins, defeat bosses, and persevere in an epic quest to earn less overtime!

The game is reminiscent of Cave Story, but very much its own beast:a level-based, linear shooter to Cave Story's guided exploration. It has fantastic music and gameplay, and the graphics, though simpler, carry the same charm as Pixel's other works. It was designed for iOS (with a notably unique control scheme that makes moving and shooting a breeze) and is available on the App Store, but you can also buy a PC version from Playism. Though it's a shorter game, the well made levels and a few secrets and bonuses lend a lot of replay value. As the first new title that Pixel has released in half a decade, it's on par with Cave Story, and well worth a try.

Jacket
This item will absorb one attack. Plus, it's warm and quite dapper!
Jetpack
You can now double jump! Explore higher and farther than ever!
Heart Jar
This will automatically replenish 4 hearts when you lose your last heart.

Note: None of the bosses in Kero Blaster have official names. The names listed below are the internal names for each boss.