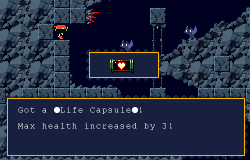 First Cave
Left-hand wall as on your way to the hermit's cave.

Yamashita Farm
At the end of the farm near the water.

Egg Corridor
Above the first save room entrance.

Grasstown
Near the first section of the stage an alcove above next to where the star block and big jellyfish lie.

Grasstown
Inside the room called the Execution Chamber.

Sand Zone
In the top-half section of Sand Zone near the sand traps, star blocks and Polish (The floating face enemies that split into mutiple smaller versions of themselves.)

Sand Zone
In the end of a long secret passage corridor close to Jenka's house an just below the two moving blocks that were dispelled after the fight with Omega.

Labyrinth
Halfway up the first room of the labyrinth, just before the moving blocks.

Plantation
In the top-left most quadrant of the Plantation.

Plantation
After gaining access to the Final Cave, jump off the rocket and make your way over to Jenka's dog, Hajime, sitting on the platform just before you enter. He will give you a life capsule, and a life pot as well if you don't have one.

Bonus Life Capsule
Located in the Sacred Grounds secret stage as you make your descent from first area.