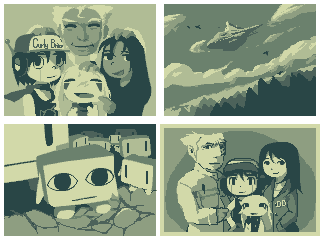 > A while back you released some beta screenshots of cave story.
> one of the pictures has Quote (Curly Brace), "Su", an unknown girl,
> and an old man with a lab coat. this leads me to this question:
> what was the original plot and who were they originally?

the unknown girl was Misery.
Curly Brace was made by the old man.
Su.. I forgot.