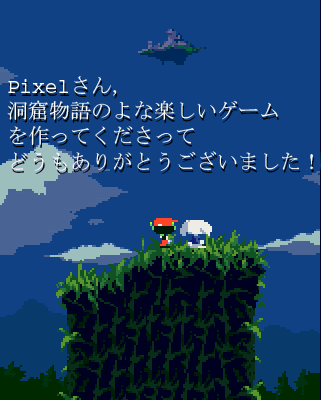 Aeon Genesis Translation Staff
For translating this game into English for International fans to play!

Nicalis
For the commercial ports of Cave Story.

PenPen
For making it possible for SkyeWelse to even continue development of the site and being extremely supportive of him even during hard times.

Niahak
For adding an incredible amount of detailed information regarding the weapon stats, upgrades, experience, damage values and a great deal of graphical content to the site. A great deal of effort was put forward in creating this new content, so thank you very much for doing all of that!

Ajutla
For giving me permission to host a well written Cave Story review on the site.

ahotcho
For giving us a large number of files that we thought were lost forever.

PD
For pointing out that the squid that appears after the battle with ironhead (depending on condition of defeat) is supposed to be Ikachan from the game Ikachan, also developed by Pixel.

SkyeWelse
For all of his work towards the original tribute site.

Nakiwo
For helping correct several inconsistancies on the site.

Wppwah
For helping provide easy to find Cave Story link information/news that greatly assisted with a long awaited update to the site!

Peter Sorenen
For helping spot some broken links and grammatical errors on the site.

Joseph
For indicating who the "Unknown Man" on the character page was intended to be.

Landon
For pointing out that the skull sprite in the unused monster section belongs to Ballos' second form.

AtrusRand, Sonicadvance1, Pigtilly2000, F, Virus610, and Schokobecher
For hosting the Deluxe Package over the years. Especially when this site had alot less bandwidth than it does now.

T-Jack
For ALL of the informaton on the Ikachan page.

innocent.bystander
For all of the info on the Glasses (Megane) page.

Daniel
For sending info on adding speed run information to the Speed Run section of the site.

Fluff8836
For the Cave Story Screensaver XP to Vista conversion guide and for testing my site for problems.

Seanbot
For kicking me into gear on replacing the flash elements on the site.

Eltons Kūns and Michał Skrzyński
For pointing out a number of grammatical issues with the site.

zxin
For pointing out new speedrun records and for helping out in general.

Enlight
For pointing out broken links and helping out in general.

Ewan Green
For pointing out outdated downloads and getting me to make it so that individual music downloads are downloaded in their native formats instead of .tar files.

Alula
For making organya-js, which allowed this site to have embedded players for Cave Story's entire soundtrack, and for helping out in general.

And to everyone else who has contributed in helping me proofread and correct errors on the site and to those who are thinking about submitting new content, suggestions or ideas.

If I forgot someone then don't hesitate to tell me.