What do people think the heights for CS chars are?

"Wow! The more I drink of this magical beverage, the more games I can play! Wheee!"
Join Date: May 19, 2012
Location:
Posts: 27
Age: 25
Personally I go with the blade strangers looks for my headcanon quote and curly, but I also think its kinda funny cause the are the size of mimga in cave story (or maybe a little bigger?)

So mimiga are even more huge of rabbits than I thought if they are the same size. Not to mention chars like Kazuma and Momorin who are taller
Feb 19, 2021 at 9:15 PM

So yeah any character six feet tall or above automatically gets an extra tile of height. It works like that in real life too (this is why there isn't any characters that are like 17 pixels high.)
I currently own and administrate a Discord server primarily focused on modding Cave Story.
To download any of my mods, all you have to do is choose a host:
Doukutsu.Club ~ Dropbox ~ Google Drive ~ Mediafire ~ Mega.nz
Feb 19, 2021 at 9:32 PM

"This is the greatest handgun ever made! You have to ask yourself, do I feel lucky?"
Join Date: May 31, 2018
Location: under your bed ;)
Posts: 103
i don't think the in-game sprites are meant to be accurate (given the credits art), so i vaguely base my height headcanons off a combination of the credits art, what it would realistically be, and then finally the sprites if there's nothing else - so full-grown mimiga would be about waist-height to an adult human, quote (and therefore curly) seem just below shoulder height to kazuma, curly might be a smidge taller than quote, misery's definitely taller than quote but probably not by a lot, etc. i've actually put a lot of thought into this (mostly for art-related purposes) but i'm terrible at visualising measurements so i couldn't give any actual numbers.

"Big Joe Tire and Battery Restaurant! Opening Soon! Eat at Big Joes!"
Join Date: Sep 22, 2012
Location: Hell
Posts: 534
I'm still of the headcanon that Quote is small and Curly and Misery and everyone (aside from some of the mimiga) are taller than him.

My reason being that I exclusively hang around on /cm/ and short boys are cute that's the law of the land I don't make the rules.

Jade said:
I'm still of the headcanon that Quote is small and Curly and Misery and everyone (aside from some of the mimiga) are taller than him.

My reason being that I exclusively hang around on /cm/ and short boys are cute that's the law of the land I don't make the rules.
Click to expand...

"Life begins and ends with Nu."
Join Date: Jun 27, 2013
Location:
Posts: 2564
Age: 26
Hmmm, how to answer this one. Because I feel like the heights are a bit too inconsistent when it comes to the characters in sprite form. You have Toroko looking and acting as young as Chie, yet she's much bigger than her, and there is a clear indication that Mimigas are smaller than humans since Itoh's taller as a human than as a Mimiga. And then we have the elephant in the room, Misery. She's seen the whole time being Quote's sprite height, but in the credits for the third ending, she's as tall as Momorin and Kazuma...
So how do I tackle the height idea?

Here's my idea on how tall the characters could be, taking many things into account:

The Doctor - 5'10", which is actually really tall for a Japanese person, most "tall" people in anime are also below 6 feet too, which I don't blame them if they feel like 6 feet is overshooting it.

Kazuma - 5'5", this will be weird to explain this, but if you take the Kazuma and Momorin sprites together, and completely ignore the pixel height, doesn't it feel like that Kazuma could be taller than Momorin? 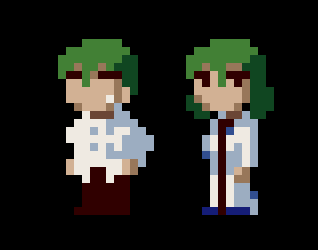 With this, it can also be safe to say Momorin is somewhere between 5'2" and 5'3". Itoh is probably also closer to Momorin's height than he is to Kazuma's, so we'll put him there, as well.

Misery/Curly Brace - Now for the more tricky ones, but I'd say these two characters are somewhere between 5'1" and 5'4", around Momorin's height.

Quote/Professor Booster - I'm going to have to agree with Jade here, Quote could actually be shorter than most of the characters, but I do think Booster is closest to his height. So for both of them, they'd fit in the 4'6" - 4'9" range. Personally, I wouldn't say Quote is ara-ara worthy, tho.

Sue - 4'4 as a human, given she's a pre-teen/early teen, and she knows how to bully Kazuma physically, despite the height disadvantage- STOP IT.

King/Jack/Mahin/Kanpachi/Megane/Zett/Sandaime/Santa/Chako/Sue (Mimiga)/Itoh (Mimiga) - Now here's an interesting one, cuz they're all rabbit people. Rabbits mature much quicker than humans, so Sue should also be taken into account, not to mention Toroko saw Sue as an older sister type of person, further implying (at least to me) that Toroko is a much younger mimiga. Because Mimigas are rabbits, the closest real life rabbit to compare to them is the Flemish giant, which on average grow to 2.5 feet long. So in this case, the adult mimigas and Sue would be 2'6" in height, since they stand on their hind legs.

Toroko/Chie - Because they are younger, we can probably say they're just about 2 feet tall.

Balrog - It's probably a bit unfair to say he's shorter than the Doctor, like in the sprites. Despite his personality, Balrog could be an intimidating force of nature based on his size alone. So Balrog would probably have to be somewhere between 6'6" and 7'0" in height, which hey, it's fitting for him since Quote and Curly sit on top of him in the end.

Ballos - Hmmmmm, how to figure out his height. It's not uncommon for priests to be tall, but given he's as old as Jenka, he in theory could be as tall as Misery and Curly. However, because he is a magic user, and let's be real here, the fact that he has all this rage and magic just building up more and more inside him, it can very well affect his physical height, putting him at a height close to 6 feet. If not, then probably closer to Balrog's height. Quote's shorter stature and speed with the Booster 2.0 would definitely give him the upper hand against the tragic villain who just wants his own life to be taken.
"I am going to stop weeding for a moment. Excuse me, I need to pee." - Lucky Beast, 2019
You must log in or register to reply here.
Share:
Reddit Pinterest Tumblr WhatsApp Email Link
Top